Okay, perhaps that title is a bit dramatic.

Maybe not revenge…definitely the return of the lemon tree. Or the revival of the LT?

Bottom line: My Lemon Tree is showing some guts and teaching me a few lessons. At the risk of seeming very cliche, it’s a metaphor for my life.

My husband grew the tree from nothing. I mean: He didn’t buy a tree. He put four lemon seeds in the ground. I thought lemon trees are beautiful and so he wanted to give me one. He even bought a lemon but guess what: the ones in the store don’t necessarily have seeds. That’s bio-engineered fruit for you.

Anyway, so we got lemon pieces as garnish with a fish dish we ate at Blue Waters Cafe. He put the seeds in a serviette, brought them home and placed the wad of paper in a pot (left there by the previous tenants) filled with soil. We added some compost and hoped for the best.

Note: We didn’t plan this to the finest detail. We didn’t place the seeds in water and see if they would germinate like you’re taught to do in primary school.

We just winged it.

Here’s our very much loved little Lemon Tree after a few months. 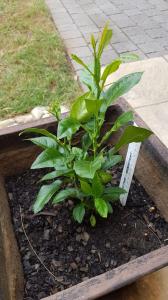 Based on the fact that they weren’t cultivated by professionals (neither of us have EVER done gardening…I mean, I’ve had cactuses that simply died due to neglect) we were pretty excited seeing it grow.

Somewhere it had to hit a snag, right?

Stage 2: Will This End Well?

I asked my neighbour (a passionate gardener with the most gorgeous flowers all around his house) what I can do to help my little tree. But he made it quite clear that even he would never grow citrus trees again. Why? Because they were difficult. In the past he could never get them to flourish.

I guess I should have taken that as a warning. I just kind of believed our LT (at the moment its name is Simon) is supposed to exist. So we kept watering it diligently.

And then the worms happened.

I saw three tiny worms on it one day, but didn’t remove them directly. I’ve had them inside the house on store bought flowers and all they seemed to do was turn into pupae. My flowers never got damaged.

No so with Simon.

I was horrified and felt kind of stupid that I let it happen.

(And even then I didn’t even want to kill them…because nature.)

I flicked them off, got a home remedy against bugs from a friend of a friend (FYI: Epsom salts work for anything apparently) and apologised to the tree.

But damage was done. Terrible damage. Most of the thin, top branches and leaves were gone. In the days that followed (unlike the previous six months) there was no change. Simon has stopped growing.

I was really afraid that I spoiled our chances of ever owning a gorgeous little lemon tree. I knew: what happens with a tree while it ‘grows up’ affects how it grows in future. What if it was damaged so much that it can’t recover?

I kept watched and watered and Epsom salted.

And then there were more. And they grew.

And then they GREW!

It felt like they tripled in height within a week!

And oh, it was the most gorgeous green. Almost like a crown on top of the older leaves that came out before the worms, the new section was a strikingly beautiful hue.

It came back with a vengeance…and now I check daily to destroy any teeny weeny worm.

My lemon tree will live! 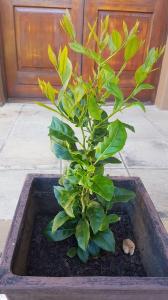 So, what does this matter?

Here we get to how this is a very apt representation of life. I’m not going to draw this out. I’m simply stating what I felt when I looked at my Simon after his battle.

So many times I have allowed wrong decisions (ignoring the worms) to break down aspects of my life:

In the aftermath, I often wonder how I will ever get back on track again.

But from where I’m sitting now, with the Epsom salts of His grace, wisdom and ‘new mercies every morning‘ I’m in a better place than I’ve ever been. I love the hue of my life.

No matter how many leaves you lost this past year. Take courage. New Life is coming.

I’m waiting in anticipation of what Simon will become one day…and what He’s doing with my life.

This is the story of building a cottage , the people and the place. Its a reminder of hope and love.

SAVE 90% OF FEES IF YOU ARE A MEMBER WITH MY CLINIC . Email: dr.fawzyclinic2019@yahoo.com

Travel for Fun and Adventure